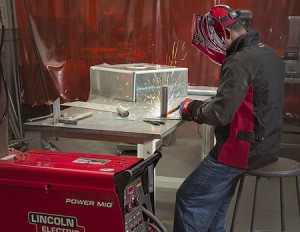 The vast majority of MIG welding applications require the use of direct current reverse polarity (electrode positive). This type of electrical connection yields a stable arc, smooth metal transfer, relatively low spatter loss, and good weld bead characteristics for the entire range of welding currents used. Direct current straight polarity (electrode negative) is seldom used, since the arc can become unstable and erratic even though the electrode melting rate is higher than that achieved with dcrp (electrode positive). When employed, dcsp (electrode negative) is used in conjunction with a “buried” arc or short circuiting metal transfer. Penetration is lower with straight polarity than with reverse polarity direct current.

Alternating current has found no commercial acceptance with the MIG welding process for two reasons: the arc is extinguished during each half cycle as the current reduces to zero, and it may not reignite if the cathode cools sufficiently; and rectification of the reverse polarity cycle promotes the erratic arc operation.

Filler metal can be transferred from the electrode to the work in two ways: when the electrode contacts the molten weld pool, thereby establishing a short circuit, which is known as short circuiting transfer (short circuiting arc welding); and when discrete drops are moved across the arc gap under the influence of gravity or electromagnetic forces. Drop transfer can be either globular or spray type.

Shape, size, direction of drops (axial or nonaxial), and type of transfer are determined by a number of factors. The factors having the most influence are:

1. Magnitude and type of welding current.

Short circuiting arc welding uses the lowest range of welding currents and electrode diameters associated with MIG welding. This type of transfer produces a small, fast-freezing weld pool that is generally suited for the joining of thin sections, out-of-position welding, and filling of large root openings. When weld heat input is extremely low, plate distortion is small. Metal is transferred from the electrode to the work only during a period when the electrode is in contact with the weld pool. There is no metal transfer across the arc gap.

The electrode contacts the molten weld pool at a steady rate in a range of 20 to over 200 times each second. As the wire touches the weld metal, the current increases. It would continue to increase if an arc did not form. The rate of current increase must be high enough to maintain a molten electrode tip until filler metal is transferred. It should not occur so fast that it causes spatter by disintegration of the transferring drop of filler metal. The rate of current increase is controlled by adjustment of the inductance in the power source. The value of inductance required depends on both the electrical resistance of the welding circuit and the temperature range of electrode melting. The open circuit voltage of the power source must be low enough so that an arc cannot continue under the existing welding conditions. A portion of the energy for arc maintenance is provided by the inductive storage of energy during the period of short circuiting.

As metal transfer only occurs during short circuiting, shielding gas has very little effect on this type of transfer. Spatter can occur. It is usually caused either by gas evolution or electromagnetic forces on the molten tip of the electrode.

With a positive electrode (dcrp), globular transfer takes place when the current density is relatively low, regardless of the type of shielding gas. However, carbon dioxide (CO2) shielding yields this type of transfer at all usable welding currents. Globular transfer is characterized by a drop size of greater diameter than that of the electrode.

Globular, axially directed transfer can be achieved in a substantially inert gas shield without spatter. The arc length must be long enough to assure detachment of the drop before it contacts the molten metal. However, the resulting weld is likely to be unacceptable because of lack of fusion, insufficient penetration, and excessive reinforcement.

Carbon dioxide shielding always yields nonaxially directed globular transfer. This is due to an electromagnetic repulsive force acting upon the bottom of the molten drops. Flow of electric current through the electrode generates several forces that act on the molten tip. The most important of these are pinch force and anode reaction force. The magnitude of the pinch force is a direct function of welding current and wire diameter, and is usually responsible for drop detachment. With CO2 shielding, the wire electrode is melted by the arc heat conducted through the molten drop. The electrode tip is not enveloped by the arc plasma. The molten drop grows until it detaches by short circuiting or gravity.

In a gas shield of at least 80 percent argon or helium, filler metal transfer changes from globular to spray type as welding current increases for a given size electrode. For all metals, the change takes place at a current value called the globular-to-spray transition current.

Spray type transfer has a typical fine arc column and pointed wire tip associated with it. Molten filler metal transfers across the arc as fine droplets. The droplet diameter is equal to or less than the electrode diameter. The metal spray is axially directed. The reduction in droplet size is also accompanied by an increase in the rate of droplet detachment, as illustrated in figure 10-47. Metal transfer rate may range from less than 100 to several hundred droplets per second as the electrode feed rate increases from approximately 100 to 800 in./min (42 to 339 mm/s).

In free-flight transfer, the liquid drops that form at the tip of the consumable electrode are detached and travel freely across the space between the electrode and work piece before plunging into the weld pool. When the transfer is gravitational, the drops are detached by gravity alone and fall slowly through the arc column. In the projected type of transfer, other forces give the drop an initial acceleration and project it independently of gravity toward the weld pool. During repelled transfer, forces act on the liquid drop and give it an initial velocity directly away from the weld pool. The gravitational and projected ties of free-flight metal transfer may occur in the gas metal-arc welding of steel, nickel alloys, or aluminum alloys using a direct current, electrode-positive (reverse polarity) arc and properly selected types of shielding gases.

At low currents, wires of these alloys melt slowly. A large spherical drop forms at the tip and is detached when the force due to gravity exceeds that of surface tension. As the current increases, the electromagnetic force becomes significant and the total. separating force increases. The rate at which drops are formed and detached also increases. At a certain current, a change occurs in the character of the arc and metal transfer. The arc column, previously bell-shaped or spherical and having relatively low brightness, becomes narrower and more conical and has a bright central core. The droplets that form at the wire tip become elongated due to magnetic pressure and are detached at a much higher rate. When carbon dioxide is used as the shielding gas, the type of metal transfer is much different. At low and medium reversed-polarity currents, the drop appears to be repelled from the work electrode and is eventually detached while moving away from the workpiece and weld pool. This causes an excessive amount of spatter. At higher currents, the transfer is less irregular because other forces, primarily electrical, overcame the repelling forces. Direct current reversed-polarity is recommended for the MIG welding process. Straight polarity and alternating current can be used, but require precautions such as a special coating on the electrode wire or special shield gas mixtures.

The filler wire passes through a copper contact tube in the gun, where it picks up the welding current. Some manual welding guns contain the wire-driving mechanism within the gun itself. Other guns require that the wire-feeding mechanism be located at the spool of wire, which is some distance from the gun. In this case, the wire is driven through a flexible conduit to the welding gun. Another manual gun design combines feed mechanisms within the gun and at the wire supply itself. Argon is the shielding gas used most often. Small amounts of oxygen (2 to 5 percent) frequently are added to the shielding gas when steel is welded. This stabilizes the arc and promotes a better wetting action, producing a more uniform weld bead and reducing undercut. Carbon dioxide is also used as a shielding gas because it is cheaper than argon and argon-oxygen mixtures. Electrodes designed to be used with carbon dioxide shielding gas require extra deoxidizers in their formulation because in the heat of the arc, the carbon dioxide dissociates to carbon monoxide and oxygen, which can cause oxidation of the weld metal.