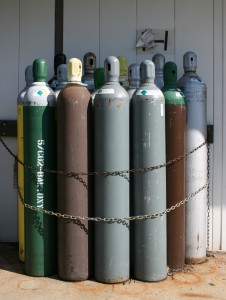 Oxygen cylinders are used in many welding operations. Below are some basic safety procedures that should be followed.

When dealing with compressed gases, Always refer to oxygen by its full name and not by the word “air” alone

Oxygen should never be used for “air” in any way.

Oil or grease in the presence of oxygen will ignite violently, especially in an enclosed pressurized area.

Oxygen cylinders shall not be stored near highly combustible material, especially oil and grease; near reserve stocks of carbide and acetylene or other fuel gas cylinders, or any other substance likely to cause or accelerate fire; or in an acetylene generator compartment.

Oxygen cylinders stored in outside generator houses shall be separated from the generator or carbide storage rooms by a noncombustible partition having a fire resistance rating of at least 1 hour. The partition shall be without openings and shall be gastight.

Oxygen cylinders in storage shall be separated from fuel gas cylinders or combustible materials (especially oil or grease) by a minimum distance of 20.0 ft (6.1 m) or by a noncombustible barrier at least 5.0 ft (1.5 m) high and having a fire-resistance rating of at least one-half hour.

Where a liquid oxygen system is to be used to supply gaseous oxygen for welding or cutting and a bulk storage system is used, it shall comply with the provisions of the Standard for Bulk Oxygen Systems at Consumer Sites, NFPA No. 566-1965, National Fire Protection Association.

All oxygen cylinders with leaky valves or safety fuse plugs and discs should be set aside and marked for the attention of the supplier. Do not tamper with or attempt to repair oxygen cylinder valves. Do not use a hammer or wrench to open the valves.

Before attaching the pressure regulators, open each oxygen cylinder valve for an instant to blow out dirt and foreign matter from the nozzle. Wipe off the connection seat with a clean cloth. Do not stand in front of the valve when opening it.

Do not substitute oxygen for compressed air in pneumatic tools. Do not use oxygen to blow out pipe lines, test radiators, purge tanks or containers, or to “dust” clothing or work.

When the oxygen cylinder is in use, open the valve to the full limit to prevent leakage around the valve stem.

Never interchange oxygen regulators, hoses, or other apparatus with similar equipment intended for other gases.