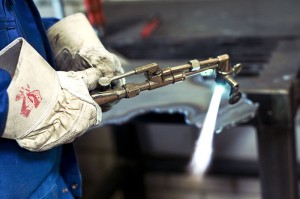 Oxy-acetylene torches have an attachment for cutting, which can be attached to the welding torch. Here the flow of oxygen is controlled a lever. In planning the job, have the tanks firmly secured to prevent tipping over, the hose should be BEHIND you so as to protect it from damage due to flying sparks. Make certain also that the hose is not in a location where it may be cut or otherwise damaged.

Beginners often mistake cutting for melting. Since the only visible agency to do work is the flame, it is assumed that the flame is melting the iron or steel. This is not so, however. Previously we have spoken of oxidation and how we must guard against it in welding; that oxidation is the burning of a metal and takes place by oxygen uniting with the metal and forming an oxide. Cutting, then, is simply the rapid oxidation or burning of the metal and the flame is used merely to get the metal hot enough so that it will oxidize quickly.

Since all metals are subject to oxidation in welding, it is natural to assume that all metals could be cut by means of oxygen from the cutting torch, but this is not so, and we are limited to those metals where the oxide is of a lower melting point than the metal itself, this being the case in wrought iron and steel. Other metals, such as cast iron, aluminum, copper, brass, etc., cannot be cut. The flame is of use simply to get the metal hot enough so that oxidation takes place rapidly ; the oxide having a lower melting point than the metal, runs off the metal and leaves a new surface exposed to the cutting jet of oxygen. Once started, this oxygen jet theoretically should be sufficient to keep up oxidation, since there is considerable heat created, the oxygen being the supporter of combustion and the metal the fuel, in other words, the metal is burnt up, but because the stream of oxygen is small, this burning is confined to a narrow area. We need the flame because other influences. Scale, dirt, the air, sand, blowholes, etc., may stop this oxidation and the flame then heats the metal to a sufficient point to again start oxidation.

Oxy-acetylene Cutting : How to

When the flame is adjusted, as described above, hold the torch with the left hand grasping it well toward the head and the right hand on the handle with the fingers controlling the lever valve. The elbow or forearm. should rest on the material being cut whenever possible to steady the torch. When we are cutting free hand, that is without the wheel guide, IT IS DESIRABLE TO ARRANGE TO CUT EITHER RIGHT TO LEFT OR LEFT TO RIGHT-not toward or away from the operator. Start on an edge, not in the center of a plate, whenever it is possible. Now hold the flame on the edge until it gets to a white heat release the lever valve and the oxygen immediately starts burning the metal. Hold the torch steady until the cut goes through-then move the torch along the line to be cut with a steady movement-not a jerky one. WATCH THE DIRECTION OF THE SPARKS. If they do not fly straight down, the cut is not going through. The torch head is slightly inclined TOWARD THE DIRECTION WE ARE CUTTING.

Previously we have remarked that various reasons cause the stopping of oxidation. The chief reason (for beginners, at least) is the unsteadiness of the hand. Just the moment this oxidation stops, use the right hand to close the lever valve on the oxygen supply, then start heating an edge exactly the same as in the beginning of the cut and when at the white heat again release the lever valve and start cutting.

When the cut to be made must be reasonably smooth, use the wheel guides, and if a straight line must be followed, clamp a suitable bar of metal to the article to be cut.

Hold the flame so that the end of the cone just licks the metal don’t attempt to plunge it down into the cut. When cutting two plates or more, or where there is a lap joint, remember that there is more or less of an insulation (air, dirt, etc.) between these plates and that the oxidation cannot be as fast as where only one thickness is cut. THE SLIGHT TIPPING OF THE TORCH TOWARD THE DIRECTION TO BE CUT IS A HELP IN CUTTING MORE THAN ONE THICKNESS.

Remember that the flame does not do the cutting,therefore, working with the smallest flame possible, will result in a neater cut.

Keep the oxygen pressure as low as possible and yet maintain speed. High pressure is spectacular and there are a great number of sparks, but it is not economical and a wider scarf is made. Don’t use the torch with greasy gloves, a spark in combination with a leak on the oxygen supply will badly burn the hand.

If a cut must be started in any place except on an edge, drill a hole or use a cold chisel and a hammer to roughen up the surface, the idea being to get an edge to quickly start oxidation.

Oxy-acetylene Cutting : Points to be Observed

DO NOT use oil or lubricant of any kind on tank valves, gauges, regulators or, other fittings, as this may result in spontaneous combustion and explosions.

Be careful that there are no leaks in any of the connections, or in the rubber tubing, and that the torch tip is free from obstruction. Always have an ample supply of gases, before commencing a job, as it is injurious to stop in the middle of the work. It is necessary to wear tinted glasses or goggles (shade 5) to prevent eye strain and potential damage.

In doing heavy work, if the burner is used continuously for a long time, or held in a confined space, it will become heated. In such cases, turn off the gases. and dip the torch head into cold water.

When working inside a boiler or tank or any small enclosure, two operators should be employed, so that one will be available to quickly turn off the gases in case of accident, such as the bursting of the hose.

No one but a thoroughly instructed, experienced operator should attempt boiler welding.

We believe the time will soon come when the officials of shops will require a Certificate of Competence from, every operator who is entrusted with that kind of work. In very heavy welding, two operators should be used, so that one can relieve the other, and the work continued until finished without interruption.

An excessive discharge of sparks indicates that too much oxygen is being used, and that the metal is being burned or oxidized. In very heavy welding, there will, of course, be a considerable volume of spark even when the flame is neutral. Butt welding is preferable to lap welding and easier to perform. In clearing the torch tips, do not use steel; employ copper or some other soft metal.

Never tighten up regulating valves on either regulator except when tank valves are open, as otherwise you might distort the diaphragm.