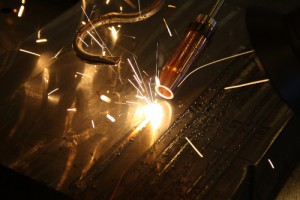 Laser beam welding (LBW) is a welding process which produces coalescence of materials with the heat obtained from the application of a concentrate coherent light beam impinging upon the surfaces to be joined.

The focused laser beam has the highest energy concentration of any known source of energy. The laser beam is a source of electromagnetic energy or light that can be pro jetted without diverging and can be concentrated to a precise spot. The beam is coherent and of a single frequency.

Gases can emit coherent radiation when contained in an optical resonant cavity. Gas lasers can be operated continuously but originally only at low levels of power. Later developments allowed the gases in the laser to be cooled so that it could be operated continuously at higher power outputs. The gas lasers are pumped by high radio frequency generators which raise the gas atoms to sufficiently high energy level to cause lasing. Currently, 2000-watt carbon dioxide laser systems are in use. Higher powered systems are also being used for experimental and developmental work. A 6-kw laser is being used for automotive welding applications and a 10-kw laser has been built for research purposes. There are other types of lasers; however, the continuous carbon dioxide laser now available with 100 watts to 10 kw of power seems the most promising for metalworking applications.

The coherent light emitted by the laser can be focused and reflected in the same way as a light beam. The focused spot size is controlled by a choice of lenses and the distance from it to the base metal. The spot can be made as small as 0.003 in. (0.076 mm) to large areas 10 times as big. A sharply focused spot is used for welding and for cutting. The large spot is used for heat treating.

The laser offers a source of concentrated energy for welding; however, there are only a few lasers in actual production use today. The high-powered laser is extremely expensive. Laser beam welding technology is still in its infancy so there will be improvements and the cost of equipment will be reduced. Recent use of fiber optic techniques to carry the laser beam to the point of welding may greatly expand the use of lasers in metal-working.

When using the laser beam for welding, the electromagnetic radiation impinges on the surface of the base metal with such a concentration of energy that the temperature of the surface is melted vapor and melts the metal below. One of the original questions concerning the use of the laser was the possibility of reflectivity of the metal so that the beam would be reflected rather than heat the base metal. It was found, however, that once the metal is raised to its melting temperature, the surface conditions have little or no effect.

The distance from the optical cavity to the base metal has little effect on the laser. The laser beam is coherent and it diverges very little. It can be focused to the proper spot size at the work with the same amount of energy available, whether it is close or far away.

With laser welding, the molten meta1 takes on a radial configuration similar to convectional arc welding. However, when the power density rises above a certain threshold level, keyholing occurs, as with plasma arc welding. Keyholing provides for extremely deep penetration. This provides for a high depth-to-width ratio. Keyholing also minimizes the problem of beam reflection from the shiny molten metal surface since the keyhole behaves like a black body and absorbs the majority of the energy. In some applications, inert gas is used to shield the molten metal from the atmosphere. The metal vapor that occurs may cause a breakdown of the shielding gas and creates a plasma in the region of high-beam intensity just above the metal surface. The plasma absorbs energy from the laser beam and can actually block the beam and reduce melting. Use of an inert gas jet directed along the metal surface eliminates the plasma buildup and shields the surface from the atmosphere.

The welding characteristics of the laser and of the electron beam are similar. The concentration of energy by both beams is similar with the laser having a power density in the order of 106 watts per square centimeter. The power density of the electron beam is only slightly greater. This is compared to a current density of only 104 watts per square centimeter for arc welding.

Laser beam welding has a tremendous temperature differential between the molten metal and the base metal immediately adjacent to the weld. Heating and cooling rates are much higher in laser beam welding than in arc welding, and the heat-affected zones are much smaller. Rapid cooling rates can create problems such as cracking in high carbon steels.

Weldable Metals. The laser beam has been used to weld carbon steels, high strength 1ow alloy steels, aluminum, stainless steel, and titanium. Laser welds made in these materials are similar in quality to welds made in the same materials by electron beam process. Experimental work using filler metal is being used to weld metals that tend to show porosity when welded with either EB or LB welding. Materials 1/2 in. (12.7 mm) thick are being welded at a speed of 10.0 in. (254.0 mm) per minute.