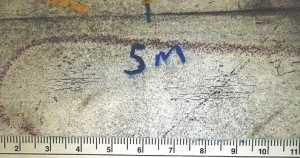 In Service cracking, due to stress corrosion, hydrogen embrittlement and corrosion fatigue are typical of material/environment interactions that are not fully accounted for in the ASME (*American Society of Mechanical Engineers) *Code design rules.

In welding, the HAZ (Heat Affected Zone) contains a potentially crack susceptible metallurgical structure, hardness variations and residual stresses that can promote various types of unexpected in service cracking, depending on the chemical environment and operating temperature.

Weldments must be designed and built to perform adequately in service. The risk of failure of a weldment is relatively small, but failure can occur in structures such as bridges, pressure vessels, storage tanks, ships, and penstocks. Welding has sometimes been blamed for the failure of large engineering structures, but it should be noted that failures have occurred in riveted and bolted structures and in castings, forgings, hot rolled plate and shapes, as well as other types of construction. Failures of these types of structures occurred before welding was widely used and still occur in unwelded structures today. However, it is still important to make weldments and welded structures as safe against premature failure of any type as possible. There are four specific types of failures, including brittle fracture, fatigue fracture, lamellar tearing, and stress corrosion cracking.

Brittle Fracture. Fracture can be classified into two general categories, ductile and brittle.

Growth markings are one way to identify the type of failure. Fatigue failures are characterized by a fine texture surface with distinct markings produced by erratic growth of the crack as it progresses. The chevron or herringbone pattern occurs with brittle or impact failures. The apex of the chevron appearing on the fractured surface always points toward the origin of the fracture and is an indicator of the direction of crack propagation.

Fracture mode is the second factor. Ductile fractures have a shear mode of crystalline failure. The surface texture is silky or fibrous in appearance. Ductile fractures often appear to have failed in shear as evidenced by all parts of the fracture surface assuming an angle of approximately 45 degrees with respect to the axis of the load stress.

The third factor is fracture surface and texture. Brittle or cleavage fractures have either a granular or a crystalline appearance. Brittle fractures usually have a point of origin. The chevron pattern will help locate this point.

An indication of the amount of plastic deformation is the necking down of the surface. There is little or no deformation for a brittle fracture, and usually a considerable necked down area in the case of a ductile fracture.

One characteristic of brittle fracture is that the steel breaks quickly and without warning. The fractures increase at very high speeds, and the steels fracture at stresses below the normal yield strength for steel. Mild steels, which show a normal degree of ductility when tested in tension as a normal test bar, may fail in a brittle manner. In fact, mild steel may exhibit good toughness characteristics at roan temperature. Brittle fracture is therefore more similar to the fracture of glass than fracture of normal ductile materials. A combination of conditions must be present at the same time for brittle fracture to occur. Some of these factors can be eliminated and thus reduce the possibility of brittle fracture. The following conditions must be present for brittle fracture to occur: low temperature, a notch or defect, a relatively high rate of loading, and triaxial stresses normally due to thickness of residual stresses. The microstructure of the metal also has an effect.

Temperature is an important factor which must be considered in conjunction with microstructure of the material and the presence of a notch. Impact testing of steels using a standard notched bar specimen at different temperatures shows a transition from a ductile type failure to a brittle type failure based on a lowered temperature, which is known as the transition temperature.

The notch that can result from faulty workmanship or from improper design produces an extremely high stress concentration which prohibits yielding. A crack will not carry stress across it, and the load is transmitted to the end of the crack. It is concentrated at this point and little or no yielding will occur. Metal adjacent to the end of the crack which does not carry load will not undergo a reduction of area since it is not stressed. It is, in effect, a restraint which helps set up triaxial stresses at the base of the notch or the end of the crack. Stress levels much higher than normal occur at this point and contribute to starting the fracture.

The rate of loading is the time versus strain rate. The high rate of strain, which is a result of impact or shock loading, does not allow sufficient time for the normal slip process to occur. The material under load behaves elastically, allowing a stress level beyond the normal yield point. When the rate of loading, from impact or shock stresses, occurs near a notch in heavy thick material, the material at the base of the notch is subjected very suddenly to very high stresses. The effect of this is often complete and rapid failure of a structure and is what makes brittle fracture so dangerous.

Triaxial stresses are more likely to occur in thicker material than in thin material. The z direction acts as a restraint at the base of the notch, and for thicker material, the degree of restraint in the through direction is higher. This is why brittle fracture is more likely to occur in thick plates or complex sections than in thinner materials. Thicker plates also usually have less mechanical working in their manufacture than thinner plates and are more susceptible to lower ductility in the z axis. The microstructure and chemistry of the material in the center of thicker plates have poorer properties than the thinner material, which receives more mechanical working.

Welding tends to accentuate some of the undesirable characteristics that contribute to brittle fracture. The thermal treatment resulting from welding tends to reduce the toughness of the steel or to raise its transition temperature in the heat– affected zone. The monolithic structure of a weldment means that more energy is locked up and there is the possibility of residual stresses which may be at yield point levels. The monolithic structure also causes stresses and strains to be transmitted throughout the entire weldment, and defects in weld joints can be the nucleus for the notch or crack that will initiate fracture.

Brittle fractures can be reduced in weldments by selecting steels that have sufficient toughness at the service temperatures. The transition temperature should be below the service temperature to which the weldment will be subjected. Heat treatment, normalizing, or any method of reducing locked-up stresses will reduce the triaxial yield strength stresses within the weldment. Design notches must be eliminated and notches resulting from poor workmanship must not occur. Internal cracks within the welds and unfused root areas must be eliminated.

Fatigue Failure. Structures sometimes fail at nominal stresses considerably below the tensile strength of the materials involved. The materials involved were ductile in the normal tensile tests, but the failures generally exhibited little or no ductility. Most of these failures development after the structure had been subjected to a large number of cycles of loading. This type of failure is called a fatigue failure.

The possibility of a fatigue failure depends on four factors: the material used, the number of loading cycles, the stress level and nature of stress variations, and total design and design details. The last factor is controllable in the design and manufacture of the weldment. Weld joints can be designed for uniform stress distribution utilizing a full-penetration weld, but in other cases, joints may not have full penetration because of an unfused root. This prohibits uniform stress distribution. Even with a full-penetration weld, if the reinforcement is excessive, a portion of the stress will flow through the reinforced area and will not be uniformly distributed. Welds designed for full penetration might not have complete penetration because of workmanship factors such as cracks, slag inclusions, and incomplete penetration, and therefore contain a stress concentration. One reason fatigue failures in welded structures occur is because the welded design can introduce more severe stress concentrations than other types of design. The weld defects mentioned previously, including excessive reinforcement, undercut, or negative reinforcement, will contribute to the stress concentration factor. A weld also forms an integral part of the structure, and when parts are attached by welding, they may produce sudden changes of section which contribute to stress concentrations under normal types of loading. Anything that can be done to smooth out the stress flow in the weldment will reduce stress concentrations and make the weldment less subject to fatigue failure. Total design with this in mind and careful workmanship will help to eliminate this type of problem.

Lamellar Tearing. Lamellar tearing is a cracking which occurs beneath welds, and is found in rolled steel plate weldments. The tearing always lies within the base metal, usually outside the heat-affected zone and generally parallel to the weld fusion boundary. This type of cracking has been found in corner joints where the shrinkage across the weld tended to open up in a manner similar to lamination of plate steel. In these cases, the lamination type crack is removed and replaced with weld metal. Before the advent of ultrasonic testing, this type of failure was probably occurring and was not found. It is only when welds subjected the base metal to tensile loads in the z, or through, direction of the rolled steel that the problem is encountered. For many years, the lower strength of rolled steel in the through direction was recognized and the structural code prohibited z-directional tensile loads on steel spacer plates. Figure 6-58 shows how lamellar tearing will come to the surface of the metal. Figure 6-59, shining a tee joint, is a more common type of lamellar tearing, which is much more difficult to find. In this case, the crack does not cane to the surface and is under the weld. This type of crack can only be found with ultrasonic testing or if failure occurs, the section can actually come out and separate from the main piece of metal.

Only a very small percentage of steel plates are susceptible to lamellar tearing. There are only certain plates where the concentration of inclusions are coupled with the unfavorable shape and type that present the risk of tearing. These conditions rarely occur with the other two factors mentioned previously. In general, three situations must occur in combination: structural restraint, joint design, and the condition of the steel.

Stress Corrosion Cracking. Stress corrosion cracking and delayed cracking due to hydrogen embrittlement can both occur when the weldment is subjected to the type of environment that accentuates this problem.

Graphitization is another type of cracking, caused by long service life exposed to thermal cycling or repeated heating and cooling. This may cause a breakdown of carbides in the steel into small areas of graphite and iron. This formation of graphite in the edge of the heat-affected area exposed to the thermal cycling causes cracking. It will often occur in carbon steels deoxidized with aluminum. The addition of molybdenum to the steel tends to restrict graphitization, and for this reason, carbon molybdenum steels are normally used in high-temperature power plant service. These steels must be welded with filler metals of the same composition.