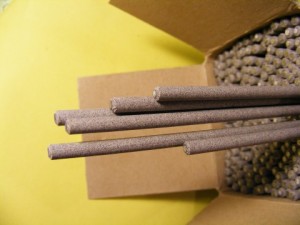 Arc Welding Electrodes. When molten metal is exposed to air, it absorbs oxygen and nitrogen, and becomes brittle or is otherwise adversely affected. A slag cover is needed to protect molten or solidifying weld metal from the atmosphere. This cover can be obtained from the electrode coating, which protects the metal from damage, stabilizes the arc, and improves the weld in the ways described below.

Types of Arc Welding Electrodes. The metal-arc electrodes may be grouped and classified as bare electrodes, light coated electrodes, and shielding arc or heavy coated electrodes. The type used depends on the specific properties required in the weld deposited. These include corrosion resistance, ductility, high tensile strength, the type of base metal to be welded; the position of the weld (i. e., flat, horizontal, vertical, or overhead); and the type of current and polarity required.

Classification of Arc Welding Electrodes. The American Welding Society’s classification number series has been adopted by the welding industry. The electrode identification system for steel arc welding is set up as follows:

The first two (or three) digits indicate tensile strength (the resistance of the material to forces trying to pull it apart) in thousands of pounds per square inch of the deposited metal.

The fourth (or fifth) digit indicates the type of electrode coating and the type of power supply used; alternating or direct current, straight or reverse polarity.

The types of coating, welding current, and polarity position designated by the fourth (or fifth) identifying digit of the electrode classification are as listed in table 5-4.

The number E6010 indicates an arc welding electrode with a minimum stress relieved tensile strength of 60,000 psi; is used in all positions; and reverse polarity direct current is required.

The arc welding electrode identification system for stainless steel arc welding is set up as follows:

The last two digits indicate the current and position used.

The number E-308-16 by this system indicates stainless steel Institute type 308; used in all positions; with alternating or reverse polarity direct current.

Light coated electrodes have a definite composition. A light coating has been applied on the surface by washing, dipping, brushing, spraying, tumbling, or wiping to improve the stability and characteristics of the arc stream. They are listed under the E45 series in the electrode identification system.

It dissolves or reduces impurities such as oxides, sulfur, and phosphorus.

It changes the surface tension of the molten metal so that the globules of metal leaving the end of the electrode are smaller and more frequent, making the flow of molten metal more uniform.

It increases the arc stability by introducing materials readily ionized (i. e., changed into small particles with an electric charge) into the arc stream.

Some of the light coatings may produce a slag, but it is quite thin and does not act in the same manner as the shielded arc electrode type slag. The arc action obtained with light coated electrodes is shown in figure 5-30.

These electrodes produce a reducing gas shield around the arc which prevents atmospheric oxygen or nitrogen from contaminating the weld metal. The oxygen would readily combine with the molten metal, removing alloying elements and causing porosity. The nitrogen would cause brittleness, low ductility, and in some cases, low strength and poor resistance to corrosion.

The electrodes reduce impurities such as oxides, sulfur, and phosphorus so that these impurities will not impair the weld deposit.

They provide substances to the arc which increase its stability and eliminate wide fluctuations in the voltage so that the arc can be maintained without excessive spattering.

The coatings contain silicates which will form a slag over the molten weld and base metal. Since the slag solidifies at a relatively slow rate, it holds the heat and allows the underlying metal to cool and slowly solidify. This slow solidification of the metal eliminates the entrapment of gases within the weld and permits solid impurities to float to the surface. Slow cooling also has an annealing effect on the weld deposit.

The physical characteristics of the weld deposit are modified by incorporating alloying materials in the electrode coating. The fluxing action of the slag will also produce weld metal of better quality and permit welding at higher speeds.

The coating insulates the sides of the electrode so that the arc is concentrated into a confined area. This facilitates welding in a deep U or V groove.

The coating produces a cup, cone, or sheath (fig. 5-31) at the tip of the electrode which acts as a shield, concentrates and directs the arc, reduces heat losses and increases the temperature at the end of the electrode.

Storing Arc Welding Electrodes. Electrodes must be kept dry. Moisture destroys the desirable characteristics of the coating and may cause excessive spattering and lead to the formation of cracks in the welded area. Electrodes exposed to damp air for more than two or three hours should be dried by heating in a suitable oven (fig. 5-32) for two hours at 500°F (260°C). After they have dried, they should be stored in a moisture proof container. Bending the electrode can cause the coating to break loose from the core wire. Electrodes should not be used if the core wire is exposed.

Direct Current Welding. In direct current welding, the welding current circuit may be hooked up as either straight polarity (dcsp) or reverse polarity (dcrp). The polarity recommended for use with a specific type of electrode is established by the manufacturer.

For both current polarities, the greatest part of the heating effect occurs at the positive side of the arc. The workpiece is dcsp and the electrode is dcrp. Thus, for any given welding current, dcrp requires a larger diameter electrode than does dcsp. For example, a 1/16-in. (1.6-mm) diameter pure tungsten electrode can handle 125 amperes of welding current under straight polarity conditions. If the polarity were reversed, however, this amount of current would melt off the electrode and contaminate the weld metal. Hence, a 1/4-in. (6.4-mm) diameter pure tungsten electrode is required to handle 125 amperes dcrp satisfactorily and safely. However, when heavy coated electrodes are used, the composition of the coating and the gases it produces may alter the heat conditions. This will produce greater heat on the negative side of the arc. One type of coating may provide the most desirable heat balance with straight polarity, while another type of coating on the same electrode may provide a more desirable heat balance with reverse polarity.

The different heating effects influence not only the welding action, but also the shape of the weld obtained. DCSP welding will produce a wide, relatively shallow weld (fig. 5-35). DCRP welding, because of the larger electrode diameter and lower currents generally employed, gives a narrow, deep weld.

One other effect of dcrp welding is the so-called plate cleaning effect. This surface cleaning action is caused either by the electrons leaving the plate or by the impact of the gas ions striking the plate, which tends to break up the surface oxides, and dirt usually present.

The proper polarity for a given electrode can be recognized by the sharp, cracking sound of the arc. The wrong polarity will cause the arc to emit a hissing sound, and the welding bead will be difficult to control.

Alternating current welding, theoretically, is a combination of dcsp and dcrp welding. This can be best explained by showing the three current waves visually. As shown in figure 5-36, half of each complete alternating current (ac) cycle is dcsp, the other half is dcrp.

The arc may be started without touching the electrode to the work piece.

A longer arc is possible. This is particularly useful in surfacing and hardfacing operations.

The use of wider current range for a specific diameter electrode is possible.

A typical weld contour produced with high-frequency stabilized ac is shown in figure 5-38, together with both dcsp and dcrp welds for comparison.

The manufacturer’s recommendations should be followed when a specific type of electrode is being used. In general, direct current shielded arc electrodes are designed either for reverse polarity (electrode positive) or for straight polarity (electrode negative), or both. Many, but not all, of the direct current electrodes can be used with alternating current. Direct current is preferred for many types of covered, nonferrous, bare and alloy steel electrodes. Recommendations from the manufacturer also include the type of base metal for which given electrodes are suited, corrections for poor fit-ups, and other specific conditions.

Coated electrodes which can be used with either direct or alternating current are available. Alternating current is more desirable while welding in restricted areas or when using the high currents required for thick sections because it reduces arc blow. Arc blow causes blowholes, slag inclusions, and lack of fusion in the weld.

Electrode Defects and Their Effects.

If certain elements or oxides are present in electrode coatings, the arc stability will be affected. In bare electrodes, the composition and uniformity of the wire is an important factor in the control of arc stability. Thin or heavy coatings on the electrodes will not completely remove the effects of defective wire.

When phosphorus or sulfur are present in the electrode in excess of 0.04 percent, they will impair the weld metal because they are transferred from the electrode to the molten metal with very little loss. Phosphorus causes grain growth, brittleness, and “cold shortness” (i. e., brittle when below red heat) in the weld. These defects increase in magnitude as the carbon content of the steel increases. Sulfur acts as a slag, breaks up the soundness of the weld metal, and causes “hot shortness” (i. e., brittle when above red heat). Sulfur is particularly harmful to bare, low-carbon steel electrodes with a low manganese content. Manganese promotes the formation of sound welds.

If the heat treatment, given the wire core of an electrode, is not uniform, the electrode will produce welds inferior to those produced with an electrode of the same composition that has been properly heat treated.